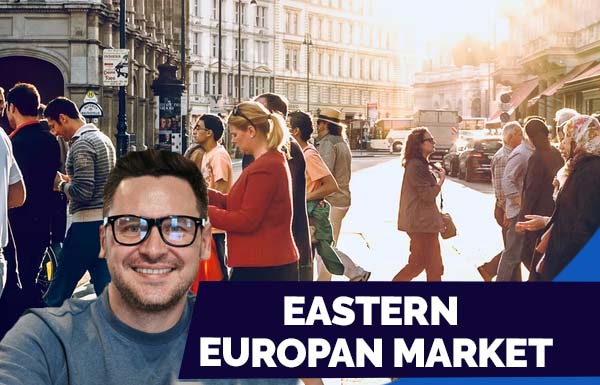 In the European market, there are 34 countries. Almost all residents have access to the Internet, with 67 percent of them shopping online. Europeans have money to spend, according to GDP. In 2019, the old continent's total GDP was € 13 trillion.

Eastern Europe is a hub for historical goodness and so many stories. But amid the incredible things it has to offer, there is an important element that never fails to surprise people. The eastern European market has definitely built a good name over the years. Despite the good name it has built for itself, its market is less expensive compared to other parts of Europe. This and many other features of the European market will be addressed in this article.

According to United Nations Statistics Division, Eastern Europe consists of Belarus, Bulgaria, Czech Republic, Hungary, Poland, Romania, Russian Federation, and Slovakia, the republics of Moldova, and Ukraine. Countries in Eastern Europe share similar properties as they are smaller in size. They also have an open market. This means that they freely trade with foreign countries and depend on their exports. The automobile industry is quite big in Eastern Europe and cars, as well as vehicle parts are exported from there to other countries.

The economy of Eastern Europe has widely grown since the fall of the Berlin Wall. A good example of a country that the break out of the Soviet Union has had a positive effect on is Poland. Their GDP has increased by over 100%. This growth is seen in other Eastern European countries except for Ukraine. Unlike its counterparts, Ukraine’s GDP reduced by over 20%.

Although Eastern Europe boasts of economic improvement, we must acknowledge that their economy didn’t start soaring immediately after the collapse of the Soviet Union. There was a decline in their GDP in the first decade as they witnessed a recession. Their GDP began to rise after the 21st century.

Cars and vehicle parts are not the only things Eastern Europe trades. They also pride themselves in their prosperous food and wholesale industry. A major industry that is thriving and has the potential to thrive better is technology. Eastern Europe is already doing very well with its trade in Biotechnology products and services. With their quality of staff, educated workforce, and proximities to Western Europe, they have an edge while delving into the technology sector. As we continue to see the growing need for technology in the world, Eastern Europe could use this to their advantage and meet the needs of people as regards technology.

Eastern Europe has no doubt experienced some setbacks but they are pulling up strong. We see their growth and advancements as opposed to the eras of the Soviet Union. The future seems to be very promising as great entities and investors confirm they are heading in the right direction.

Shopify is listed as the best ecommerce software related to European Ecommerce Platforms. Shopify was founded in 2006 in Ottawa, Canada and currently has over 6,124 employees registered on Linkedin.